After failing in their first attempt to return a magical amulet to the people of Kagamil Island, Anna and Booker have returned to try again. Their first visit ended with an escape from the Woman of the Volcano, a spirit of fire who ruled over this part of the Aleutian Islands. The people of Kagamil Island could turn themselves into fox, and the amulet is an ivory carving of a fox. This excerpt is in Anna’s voice. She is a 14 year-old Unangax^ (Aleut) girl. Booker is 13 and the owner of a magical bookmark.

The last time I had hiked on the island, the day had been dry. Now the deep grass along the shore was heavy with recent rain. Shoals of wide blades were bent double under the weight of water. Each blade funneled a stream onto me as I ploughed through. Even at higher elevations, the ground cover was wet and the grass was as slippery as a carpet of kelp on the beach. Struggling uphill, we pulled on wet blades to gain traction. Gliding downhill, we pumped our arms and hands into the grass to slow down and to keep from tumbling headfirst. My fingers were chilled. The sun was beyond the meridian, over the mountain and heading toward the western sea. Cold, wet, and exhausted, we hiked on until Booker sat down.

He widened his eyes at the absurdity.

I stared at the distant shoreline and again wished I had Vasilii’s ability to see things in the distance.

We set off again, now angling slightly down toward what I hoped was the bay where we had seen the Kagamil people. A stretch of hillside protruded like the rounded bill on a baseball cap. I went ahead as Booker adjusted the strap on his pack.

“I think we’re going to make it,” I said and pointed toward the distant cove where two large open skin-boats had pulled ashore.

I glanced back as he caught up. A shadow darted across a high ridge.

“I don’t like this,” he said, not seeing anything.

I caught another dark swift flash.

We ricocheted from side to side as we launched ourselves down the hill. For a moment, the shoreline came back into sight and then it disappeared beneath the crest of another hill. We crawled out of a ravine of dense ferns and stunted lupine and hurried across a bare exposure, leaping from stone to stone. We side-stepped down a grassy incline. Twice he slid into my feet and sent me flying. After what must have been at least a half-mile, we found ourselves on a ridge directly over the bay where the Kagamil people had come ashore.

A rocky saddle on our right swept toward an outcropping carpeted with grass. Booker followed me up. On top, it was like walking the peak of a grass-covered roof or a high narrow bridge. The view was amazing, but more importantly we could now see the whole bay below us. A boy with a tattered gut raincoat had climbed higher than all the others.

“He’s not picking many berries,” I whispered. We were on our stomachs. He was right below us.

“Jeez,” I said as I got to my knees and took a deep breath.

Then he unfroze, or rather the whole side of the mountain unfroze as an earthquake shook the landscape.

Booker sprang to his feet as a jolt whipped the extended bridge we were on. I leapt onto a grassy oasis, but Booker slipped and in seconds he was surrounded by sliding rocks. He grabbed at anything — grass, rocks, twigs — but nothing held. His raincoat was crushed up and under his armpits. He careened sideways as rocks pummeled and scraped his ribs. A current of gravel carried him downstream. He dug his elbows in and arched his back as his backpack slipped off his shoulders and was swept away. I could see that directly ahead of him the swift stream of gravel merged with a river of grinding rocks that devoured everything in its path. He braced his legs to cut his acceleration, but the sudden jamming launched him headfirst. He sailed over a cascade of small boulders. A fine dust hovered in the air, and then the rumble of the landslide diminished.

I raced to where he had tumbled, cattywampus and perfectly still. I touched his back, and he rolled a little to one side and groaned. He started to sit up and immediately fell back. A boulder was lodged over his left leg. I wedged my shoulder against it, and shoved. I shoved again. If it moved, it didn’t move enough.

The acrid stench of a red fox washed toward us as it scampered across loose rocks and gravel toward the backpack. I shouted to scare it away. It stopped at my voice, tilted its head as though expecting me to say something comprehensible, and then snapped the pack between its teeth, shook it, and in a moment had dropped it at my elbow.

“Give it to him!” Booker shouted as he tore at his pants.

Then I was on my knees flinging open the leather pack. I reached in and removed the folded handkerchief. I opened it and held out the ivory fox strung on its leather cord. I held it at arms length toward the fox. My hands shook. The fox inched closer. My fingers twitched. It wrinkled its nose.

But the fox dipped its head and leaned in closer. I slipped the cord over its head. It shook the way an animal does to remove a pesky fly, and the cord settled at the base of its shoulders.

Booker was pulling on his leg. But nothing gave.

“Find something, Anna!” he shouted. “A two-by-four, a branch! Something!”

Fat chance of finding either on a treeless island. I picked up a flat stone and wedged it under the boulder and pushed, hoping to leverage it up.

But I hurled the flat stone away and began digging around the base at the front of the boulder, flinging stones every which way. Then I stood beside Booker and pushed downhill against it with every inch of strength I had. It tilted just a fraction of an inch, but a fraction enough.

Far below, a skin boat had pulled away from the shore.

As Booker rolled to his feet, I caught a glimpse of red fur. The young fox was staring up. I again clapped my hands, and in an instant the fox and the charm were gone.

“Stinky!” Booker said. He checked to see that he had his bookmark just as the ground vibrated and a geyser of hot air tore from the rocks.

I screamed and grabbed his arm as a voice that crackled like fire began to laugh.

* The University of Alaska Press will publish Ivory and Paper in the spring of 2018. 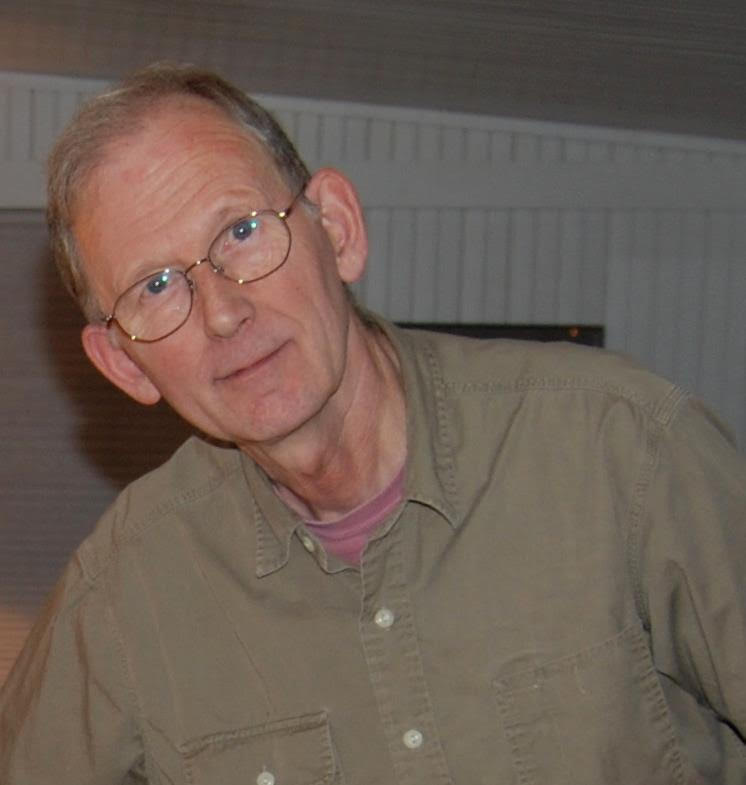 Artist Statement:   Writing fiction and poetry is another way of approaching what I try to do when writing ethnography and history: to describe one corner of this infinitely varied world with vigor and accuracy. The preservation of endangered cultures, such as the Unangax^ of Alaska’s Aleutian Islands, will ensure a richer world for all of us. But even the most “traditional” and endangered cultures are never static. I look to elders of the past and to contemporary Unangax^ for guidance and inspiration.

Bio:   Ray Hudson’s memoir of living in the Aleutian Islands, Moments Rightly Placed, was listed among the 10 best books on Alaska in a recent article in The Guardian. It was selected as one of Alaska’s best history books by the Alaska Historical Society. He is the author and editor of several scholarly books on the Aleutian Islands. A retired public school teacher, he is a woodblock artist and poet who lives in Vermont.