• Sacred Stories: Beyond Joy and Pain

• The Fountain and the Thirsty One by Mahvash Sabet

• An Opening in the Curtain by Martha Washington

• The Wound is Where the Light Enters by Sandra Lynn Hutchison

• Thy Court of Holiness by Mahsa Foroughian

• The Silence of Being Heard by Nazanin Eslami

• The All-Highest Paradise by Melika Rezvani


State of the Art

• Pearls of Bounty and Light of the World 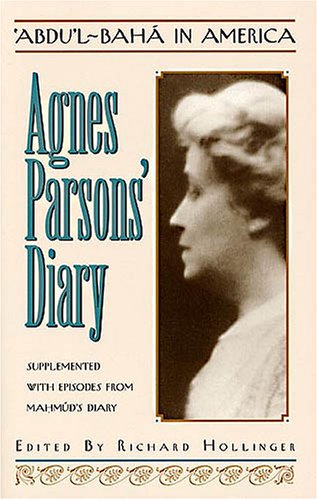 This book is a treasure and we can only feel the deepest appreciation to historian and editor Richard Hollinger for taking this manuscript out of the National Bahá’í Archives in Wilmette and putting it into the hands of readers who wish to imbibe something of those heady early days of the Bahá’í Faith in America. The crowning achievement of a long life of sacrificial ministry, ‘Abdu’l-Bahá’s travels in North America were the subject of a number of personal diaries and memoirs penned by His Father’s followers, but few offer the kind of rich detail this diary offers, probably because it was written by someone who associated closely with ‘Abdu’l-Bahá during much of his visit.

This diary tells one of the most important stories of our time: the story of the early efforts of the American Bahá’ís to dismantle the cruel legacy of slavery — racial segregation. Agnes Parsons was a key figure in the early Washington, D.C. Bahá’í community. ‘Abdu’l-Bahá named her as an “advisor” to the community; and, along with a “working committee” formed in lieu of a Local Spiritual Assembly, Parsons oversaw the affairs of the community during this period. ‘Abdu’l-Bahá stayed in her homes both in DC and in Dublin, N.H. Consequently, she was privy to His day-to-day interactions with a host of people, and engaged with Him herself on a daily basis.

For those interested in learning more about the history of Bahá’í activism with respect to race relations, this book is a must. Reading this diary, we are eyewitnesses to the ways in which ‘Abdu’l-Bahá’s then radical teachings on racial equality burst open the seams of the comfortable life of elite Washington society and disrupted many long-held conceptions not only about skin color but about social class.