Falling Into Place and Depositions 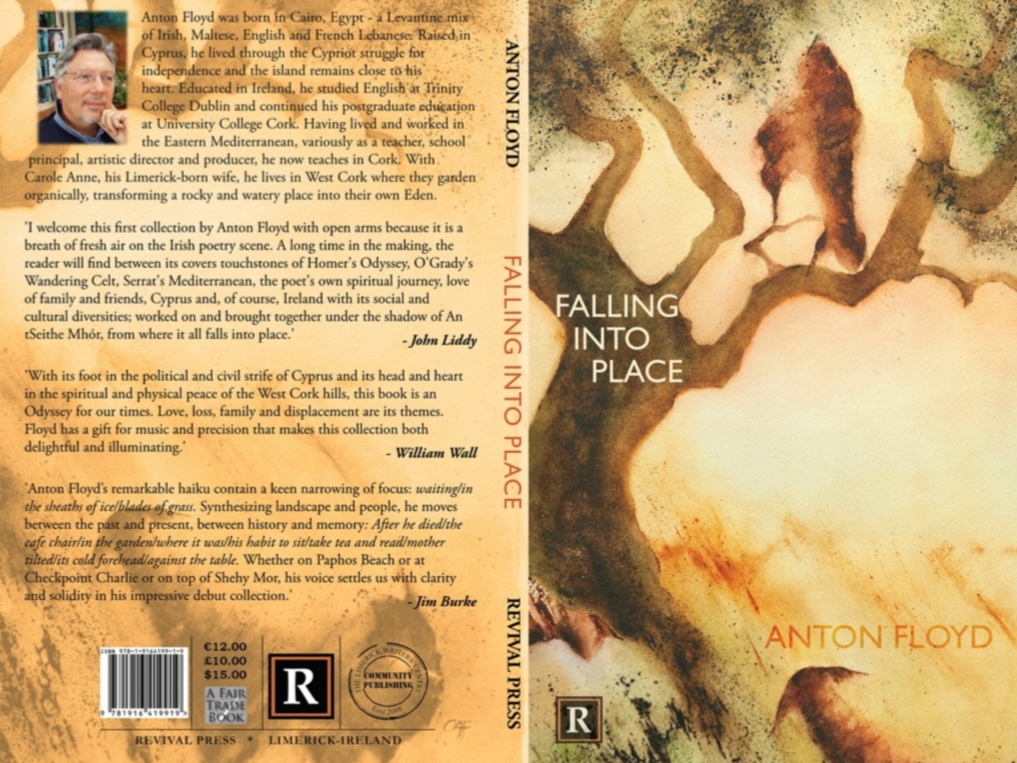 Falling Into Place is an assured and illuminating poetry debut by Anton Floyd, an Irish poet who is a Levantine mix of Irish, Maltese, English and French Lebanese. Born in Cairo, Egypt and raised in Cyprus, Floyd experienced firsthand the Cypriot struggle for independence. The title, Falling Into Place, carries connotations of innocence, love, family, and place, each revealing a spiritual affinity with mutability and loss. Also layered in the choice of title are the ideas of finding a place in the hills of West Cork as well as a home in poetry. Individual poems demonstrate Floyd’s naturalist’s sensibility and reflect his version of his personal history, which he sets within larger historical and political contexts. The four haiku opening the collection subtly anticipate these concerns and establish the language:

waiting
in the sheaths of ice
blades of grass

His keen and narrow focus and careful observation capture the spiritual and physical peace of the West Cork Hills, where he lives today:

nightswim
in mountain water
touch of the moon

The epigraph, which consists of a quote from Ralph Waldo Emerson, sets the tone for the poem “Tracks,” one of a number of sonnets in the collection, in which the poet explores his deep interest in odyssey:

...all the winding tracks we follow,
all rituals of farewell and greeting,
we map the imprints as we go...

As Mary Oliver notes, “attention without feeling is only a report.” Floyd instinctively understands this. He uses vivid imagery to show us what it is to live through political and civil strife, connecting his experience to a broader view of history. His recall is sharp, philosophical, and avoids melancholy, yet it embraces emotion, as in the following lines from “Through Slatted Shutters — December 1963,” in which Floyd tells of his family’s eviction at gunpoint from their Nicosia home:

...we left by the kitchen door
passing under the orange tree.

My father looking up said
no other oranges
will ever taste as sweet.

In another poem in the collection entitled “In That Dawn’s Early Light 1974,” the poet recalls a day unlike any other:

Absurd this surreal imagery.
A dirty trick of the mind
to tell delicately how deadly
parachutes filled the sky.

“The Longest Distance Between Two Places” is a prosimetrum poem (haibun) in which the poet laments what he has lost:

Many of the poems in the collection contribute to a complex layering that underpins questions of identity — being and belonging. “Staying On” is one such poem:

Mikis told me and I believed
the lichen blotches
crusted on some stones
was the blood
shed by brave Cypriot heroes
to free our homes.

There are many memorable poems in the collection. I was particularly struck by “In Honour of Mahvash Sabet” and “Kites — Nicosia,” both of which express a yearning for a unified world in which empathy reigns:

I imagine
every high flying kite
mastering the winds

to be John Birks, Dizzy Gillespie,
be bopping round the world,
his skywards pointing trumpet

reaching for the high note,
a prayer for the heyday
a world without passports.

And then there’s “Angel of History,” which is a reworking of Walter Benjamin’s essay on Paul Klee’s painting of the same title. Floyd offers a clear-eyed assessment of a world afire with conflagration yet finds hope where Benjamin, a refugee himself, saw only despair. The opening and closing stanzas illustrate these contrasting mindsets and hint at a direction Floyd’s next collection might explore.

See his Angel of History
with wings out-spread
turn to face the past
and stare open-mouthed
at the single catastrophe.

...under the piling ash
that grows skywards
minute by minute.
We sift from the debris
vestiges of hope. 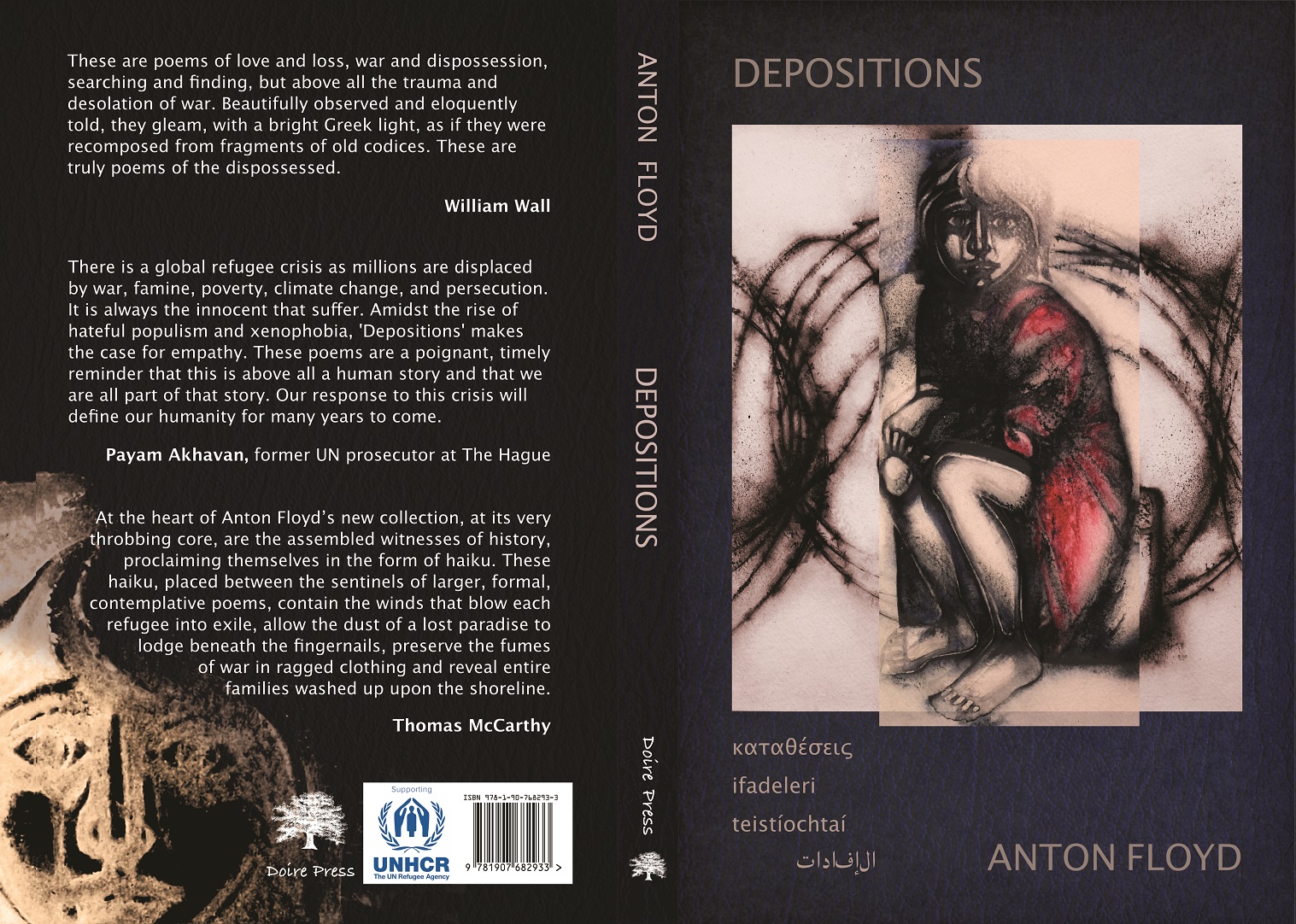 Floyd’s Depositions, which is forthcoming in 2022 from Doire Press, takes an entirely new approach in terms of poetic form. The poet opens with a handful of troilet-style poems, before engaging with the haiku form. In these poems, Floyd leaves behind the world of the classics and fine art that emerges from time to time in Falling Into Place and directs his attention towards the dispossessed:

summers once
a glass blue sky
without cracks

Depositions tells the story of an all-too-familiar human journey: the journey of loss. In the following haiku, Floyd writes of sifting through debris:

a child
facedown in the shallows
line in the sand

The poet’s imagery is vivid and clear:

The open-form haiku used in Depositions allows Floyd access to a universal language and imagery:

distant thunder
black smoke from the village
fringing the hills

dry mouths
hovering around the empty pot
the thin syllables

Shakespeare, Ford, Read, Auden, Lewis, Shire, are just some of the poets who have added to the canon of refugee and displacement writing. Now, in Depositions, Floyd, whose family history is woven from a long story of displacement, bravely has his say. This is an exciting and relevant collection. There is empathy with the unnamed people and places. And occasionally, we feel a delicate touch, though for the most part the poet’s voice is urgent and inescapable:

only voices
unchecked
by razor wire

A selection of the poems has been translated into languages widely spoken by the exiled. In this way, too, the plight of the dispossessed finds its rightful place on the page. 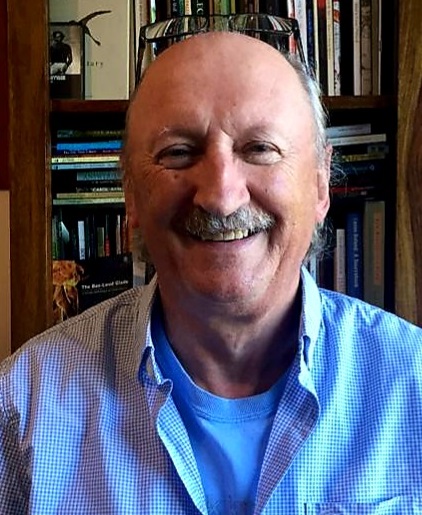 Jim Burke
Bio:   Jim Burke lives in Limerick, Ireland, and, with John Liddy, was Co-founder in 1975 of The Stony Thursday Book, making the publication one of the longest-running literary journals in Ireland. He completed his MFA in Creative Writing in Manchester Metropolitan University in 2018. A selection of his haiku is featured in the anthology, Between the Leaves (2016), which was edited by Anatoly Kudryavitsky. Quartet Poems, with Mary Scheurer, Peter Wise and Carolyn Zukowski, appeared in 2019. Montage was published by the Literary Bohemian Press in 2021.