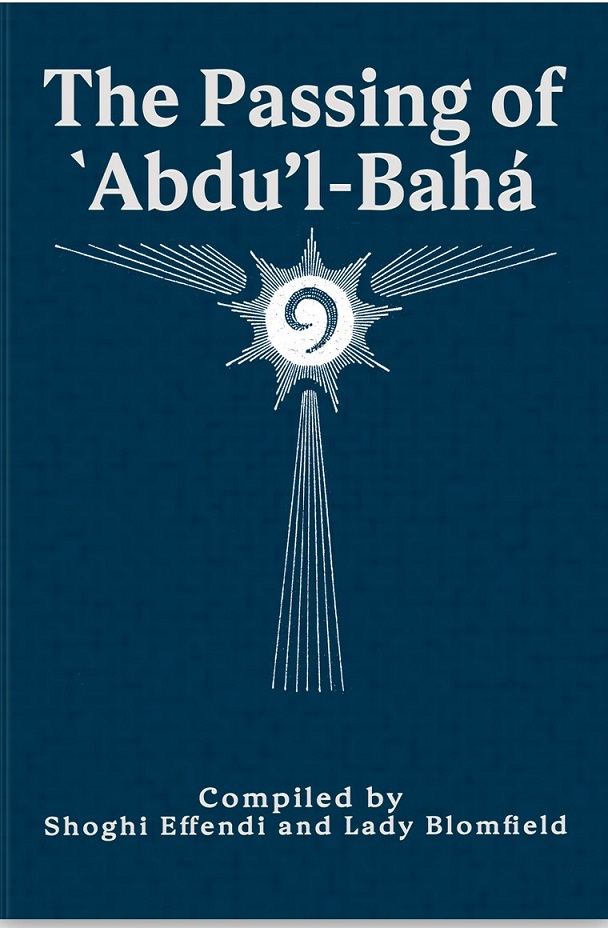 The Passing of ‘Abdu’l-Bahá

As a tribute to this special year, we look back on a book first published in hardcover by Kalimat Press in 1991 and reissued this past year in paperback to mark the hundredth anniversary of ‘Abdu’l-Bahá’s passing. One can scarcely think of a better way to round out a year devoted to reflection on the Master’s life than by reading these accounts, compiled by Shoghi Effendi and Lady Blomfield, of the remarkable impact ‘Abdu’l-Bahá had on all who had the good fortune to encounter Him.

In this book, we see the Master, a figure completely unique in religious history, through the eyes of His broken-hearted followers. While tears are sometimes thought to blur the vision of the mourner, in these accounts, tears seem to bring the scene more sharply into focus. How different is life without ‘Abdu’l-Bahá! As these mourners attest, His absence leaves a space that can never be filled. Not that there was ever any doubt about this in their minds, but for those who were living in or visiting the holy land at the time of ‘Abdu’l-Bahá’s passing, the sorrow of loss seems to make feelings of love even keener.

The book includes two letters written by Joanna Hauf to her parents in Germany, two more written by Louise Bosch to Ella Cooper — a member of the first group of western pilgrims to visit the holy land — in San Francisco, and a letter written by Ethel Rosenberg to the “Friends in England.” There are letters from Ahmad Tabrizi and from Abbas Adib, who was in Damascus at the time, to Zia Baghdadi in Chicago; a letter from Munavvar Khanum, one of ‘Abdu’l-Bahá’s daughters, to Ruth Wales Randall in Boston; and a letter written by Muhammad Sa’id Adham to the Bahá’ís in the West, which was published in Star of the West (January 1, 1922).

Of interest to both layperson and historian is the account of the fortieth-day memorial service held for ‘Abdu’l-Bahá that appeared in Haifa’s Arabic newspaper. This account takes us back in time and enables us to gain a clearer understanding of how the Master was viewed by local people who were not Bahá’ís, and, in many cases, devoted followers of other faiths.

Without doubt, however, the most moving and consequential letter to be included in this book is the letter Shoghi Effendi, as the newly appointed Guardian of the Bahá’í Faith, wrote to the Bahá’ís of America. This intensely moving letter lies at the very heart of the book, as does the lengthy essay the grief-stricken Shoghi Effendi managed to write with the help of Lady Blomfield, about ‘Abdu’l-Bahá’s final days on earth — the prayers He revealed, the kindnesses He showed, the assurances He gave, the dreams He had, and the ways in which, it became clear in retrospect, He tried to prepare His loved ones for His passing.

As we leave this centenary year and embark on the nine-year plan, we would do well to read this important little book and so strengthen ourselves with a deeper understanding of the remarkable legacy left by One who loved so deeply and so indiscriminately.