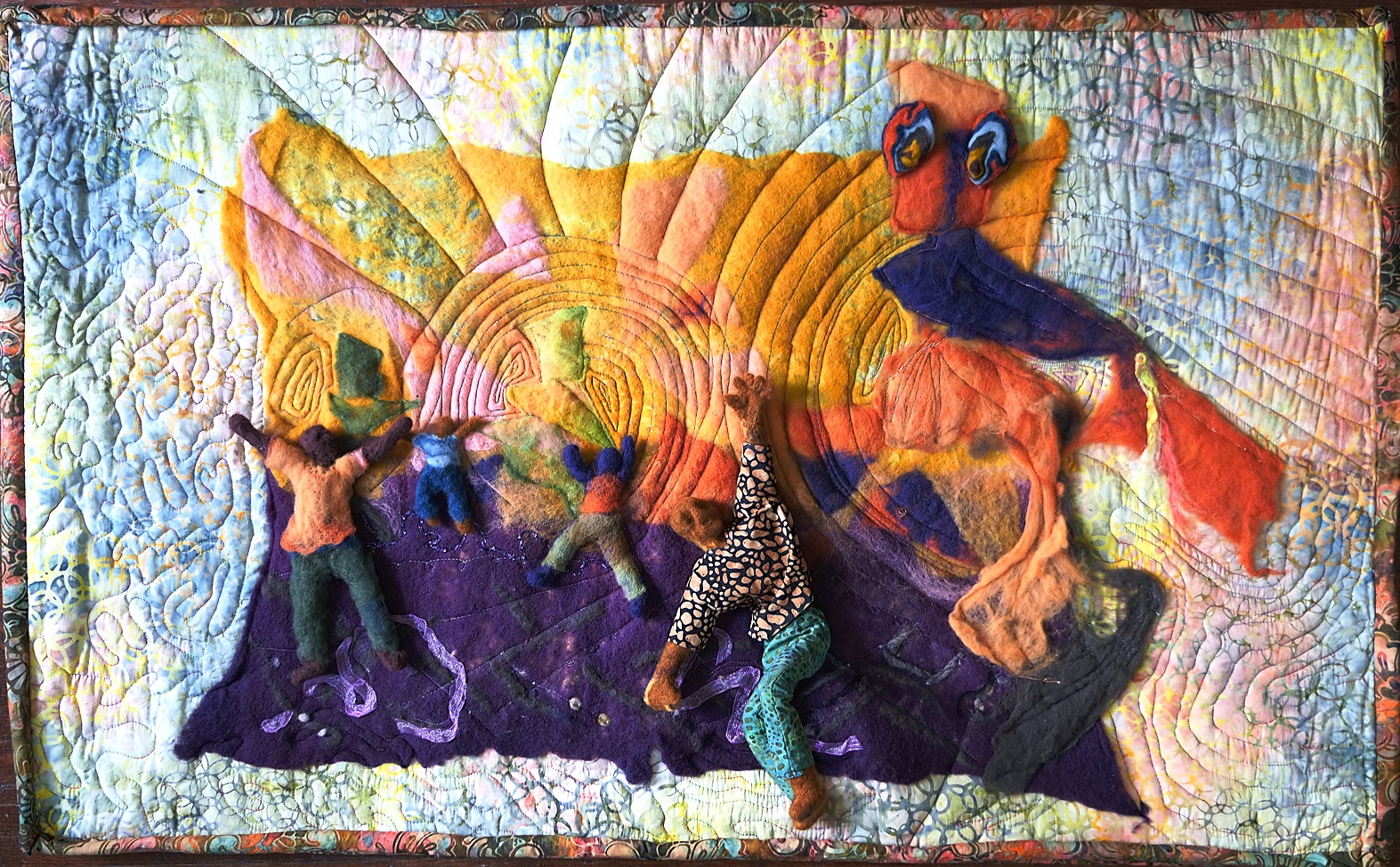 People often share stories with me. This quilt tells the story of a group of black men who were chanting and praising God. When the chanting had stopped, one man said to another that he had seen his grandfather. The other man responded that he, too, had seen his ancestor. 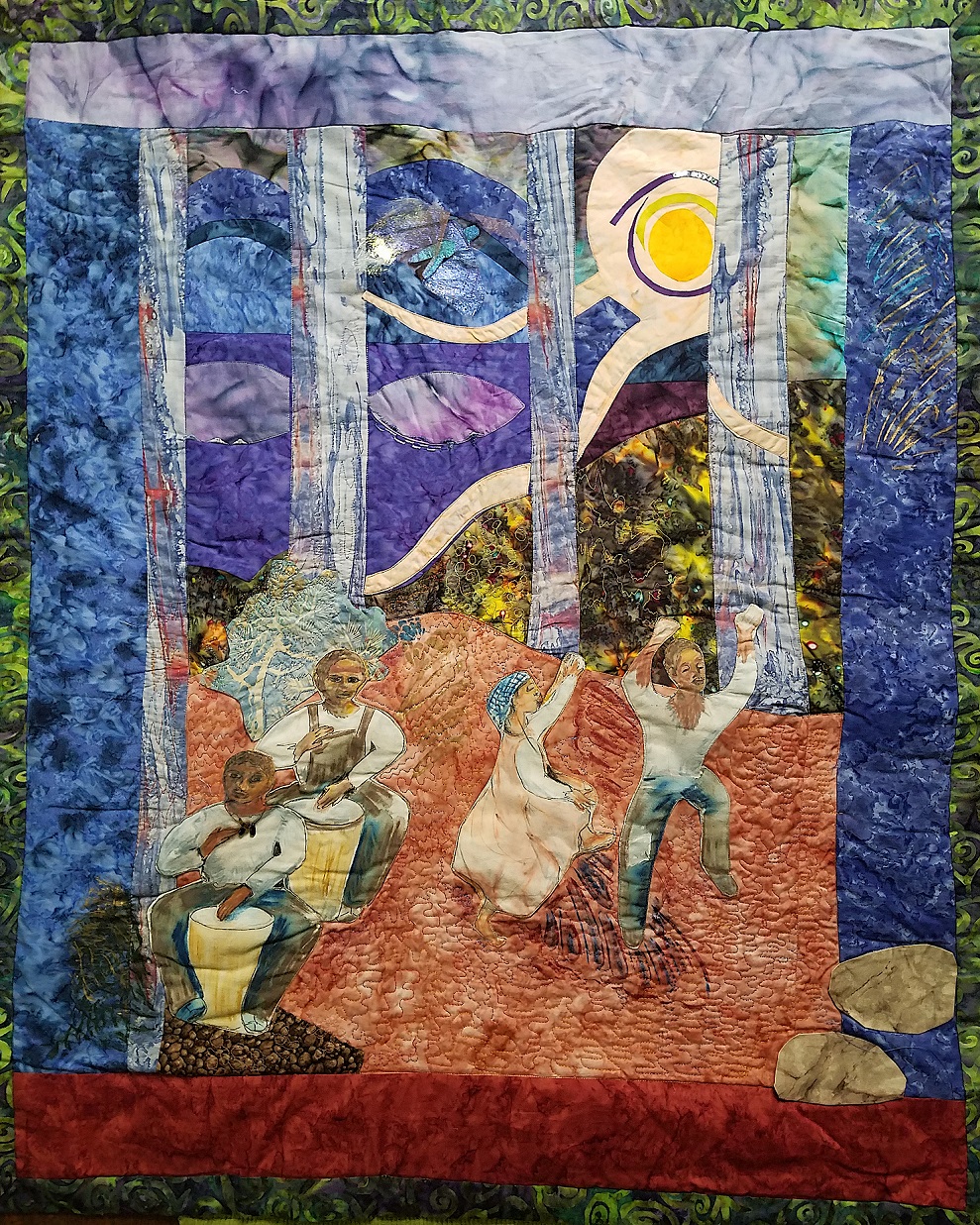 This quilt was created in response to Robert Hayden’s poem “O Daedalus, Fly Away Home”. In the second stanza Hayden writes, “Night is a juba, night is a congo/Pretty Malinda, dance with me.” These words speak to the longing of the soul. 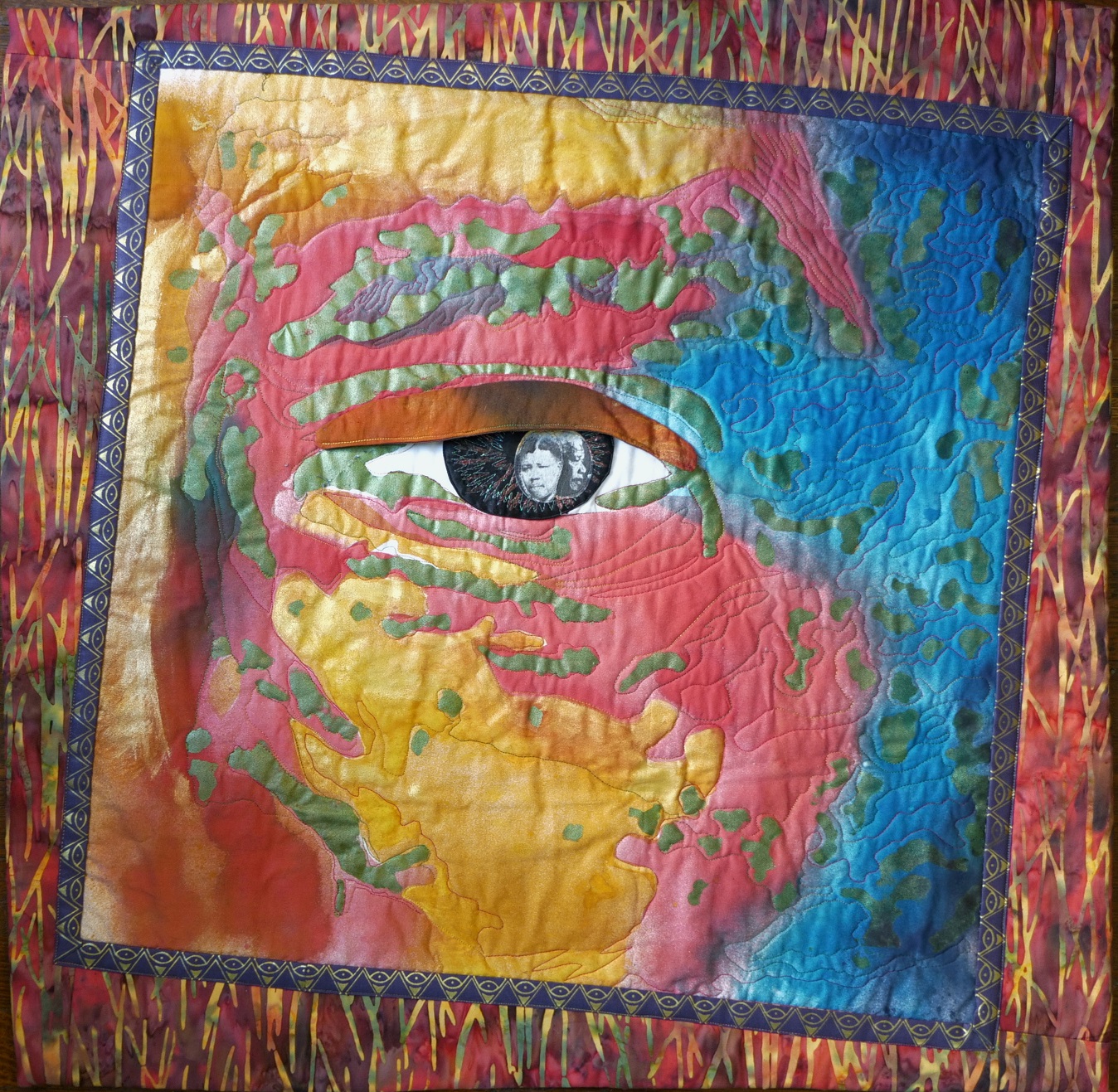 When I received an artist call for quilts to be shown in an international quilt exhibition in South Africa, friends made suggestions about what image would best represent the place Nelson Mandela holds in our hearts and minds. They all agreed that he was best symbolized by the pupil of the eye—light in spirit. 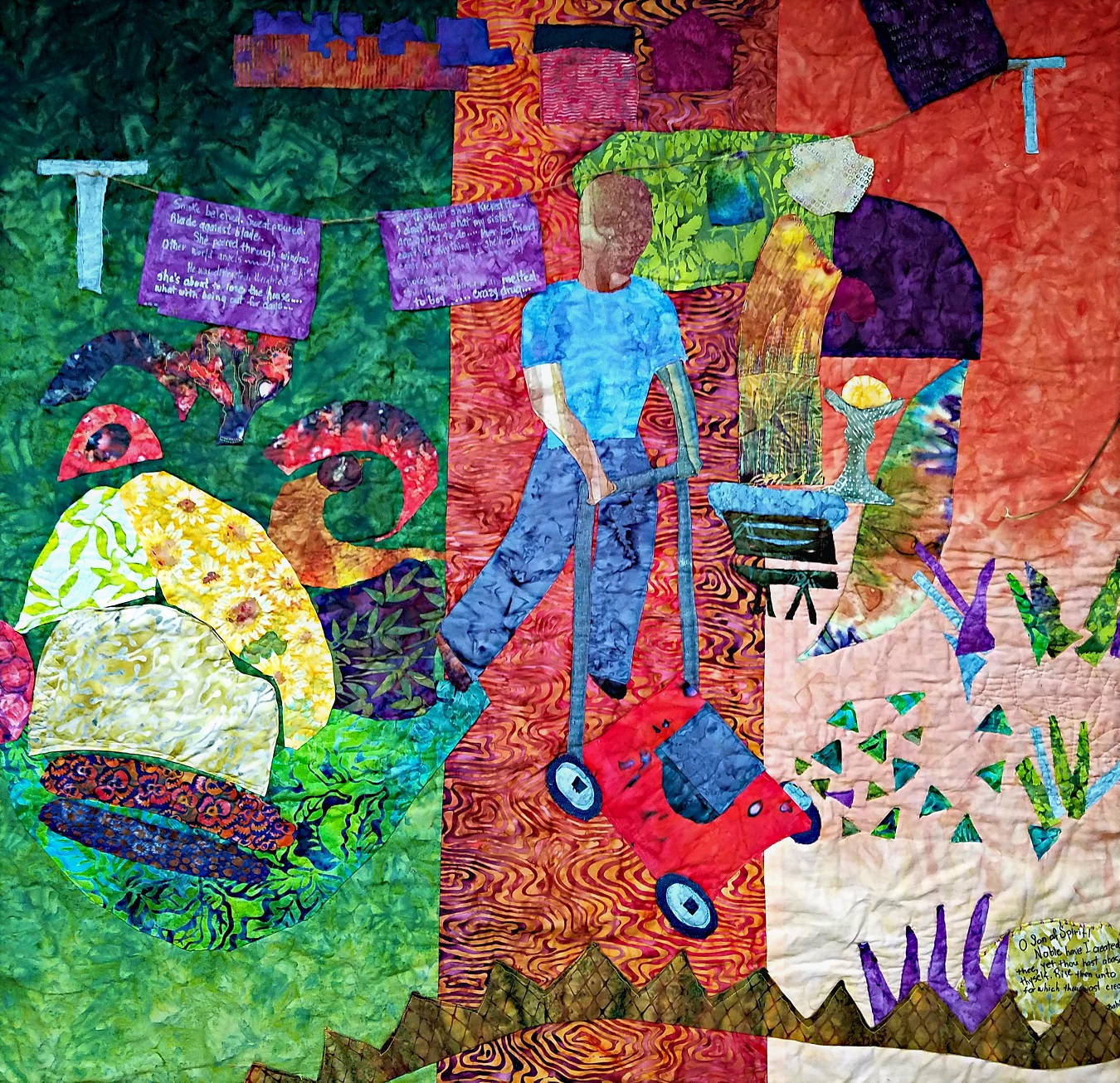 My young neighbor saw that my yard needed mowing, so he cut it, unasked. He showed up every other week. One day, as he mowed, I heard a voice say, “Talk to him!” Once the grass was cut, we chatted, small talk, until his halting voice revealed the urgency of the exchange. He needed to confide in someone that his mother was in the crack house again. The pouring out of his story seemed to me like his aerating of a densely packed memory so that the roots of his being could breathe again. 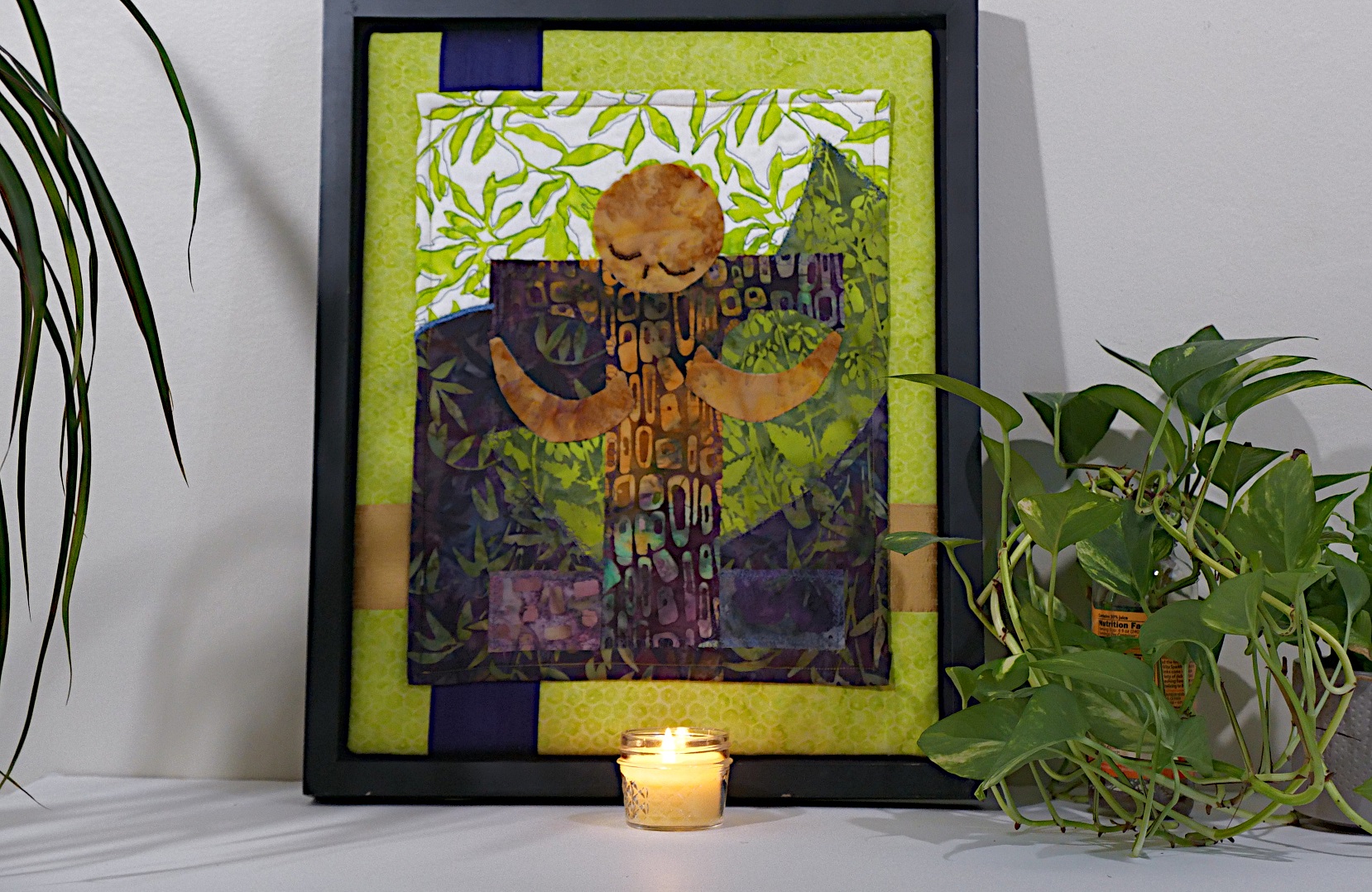 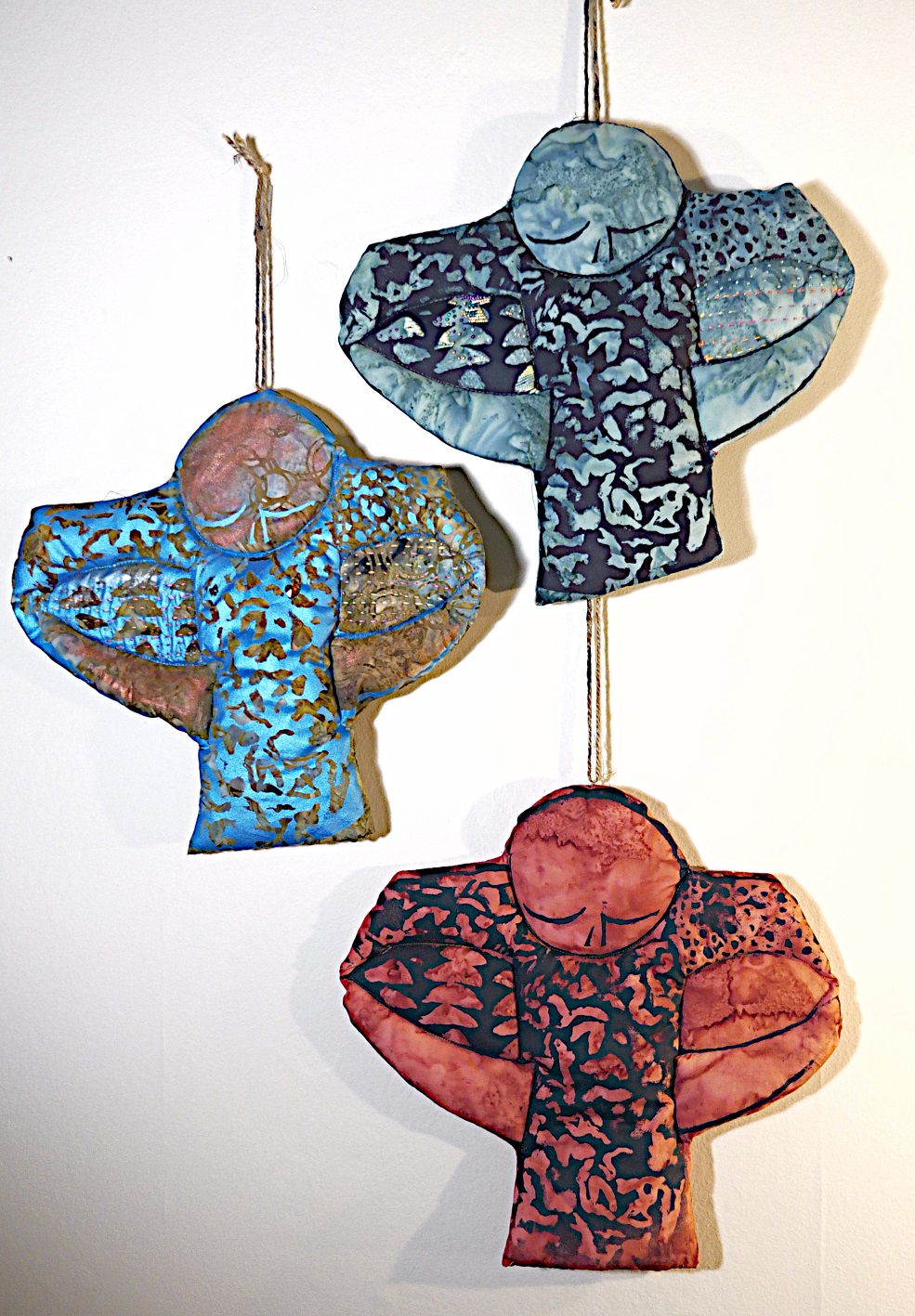 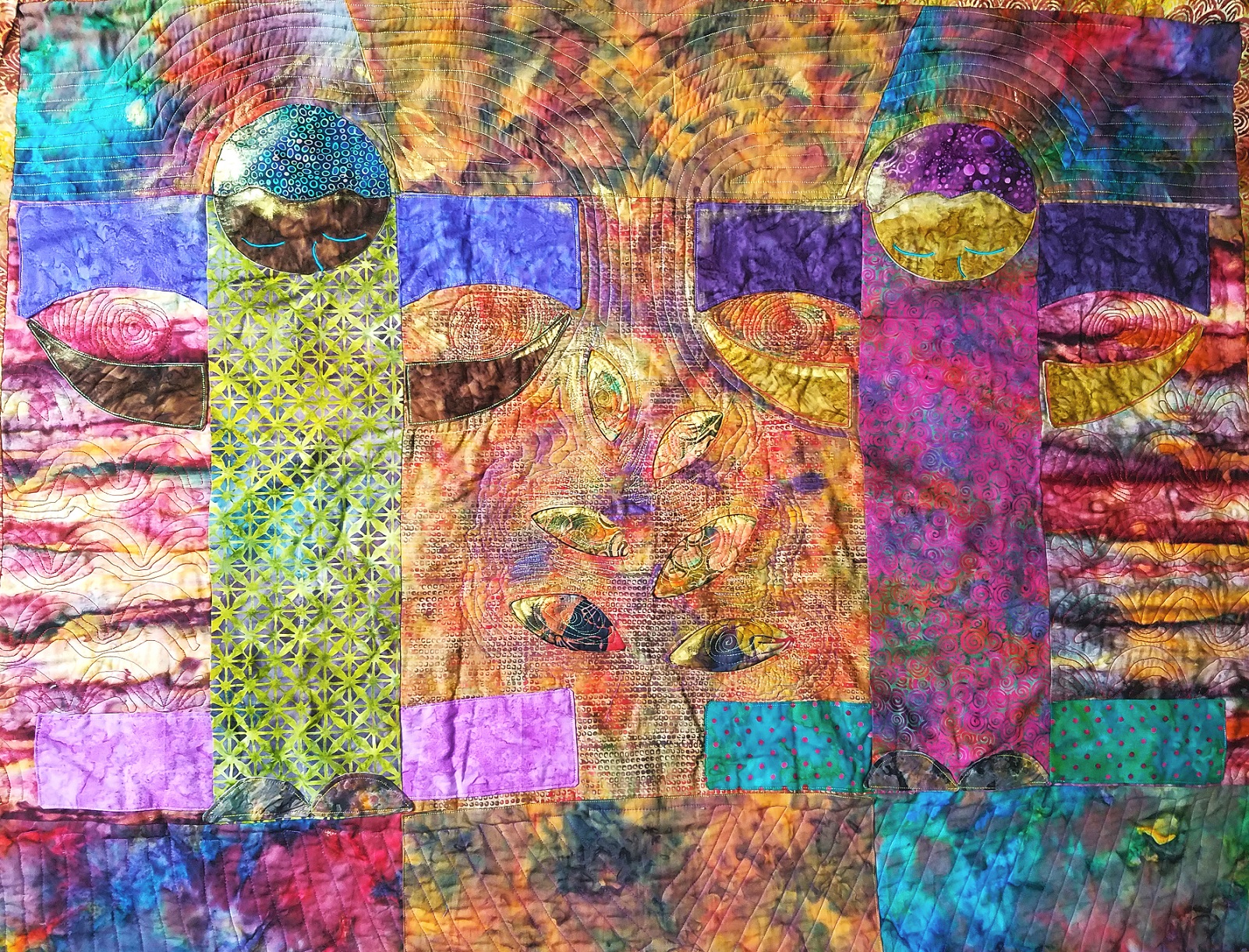 This series was created as an invitation for individuals to look inward for guidance and as an affirmation of the power of self-reflection to lead in the direction of the independent investigation of truth rather than blind imitation. 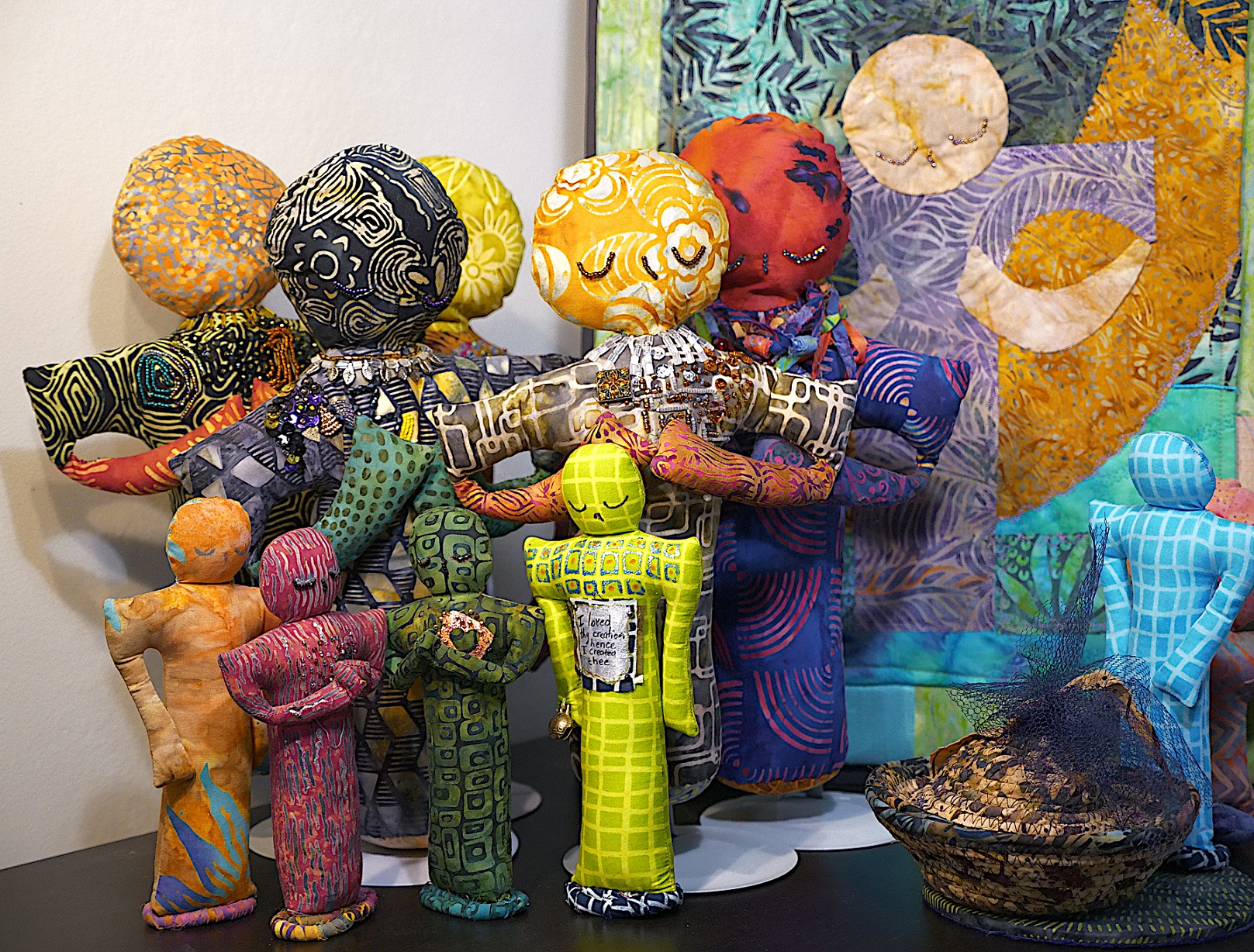 An offshoot of the “Pupil of the I” series, “Spiritual Companions” issues the same invitation to look inward for guidance. 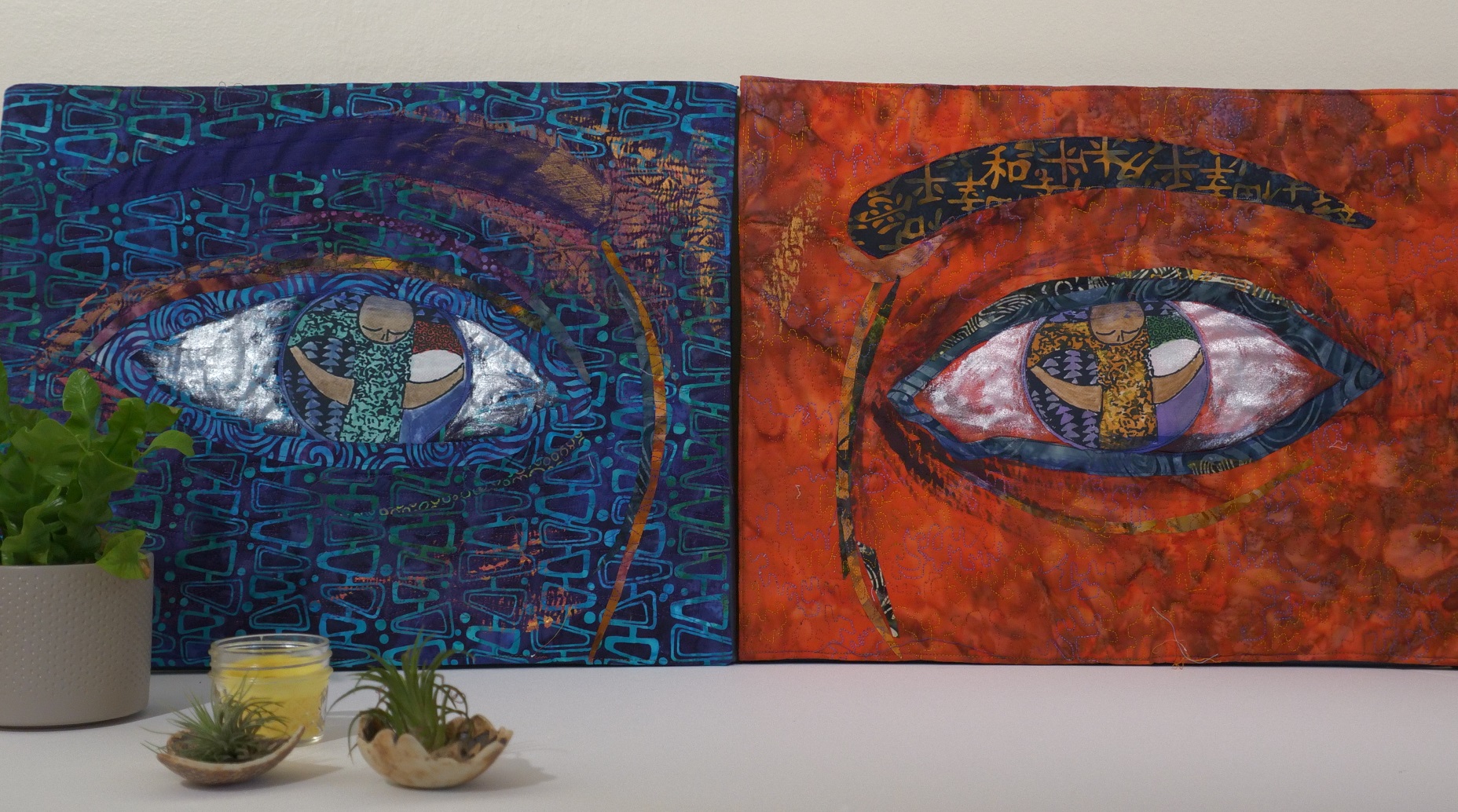 The gaze is a powerful means for centering. The capacity to reflect is both a reminder that we are seen and that we must look within. 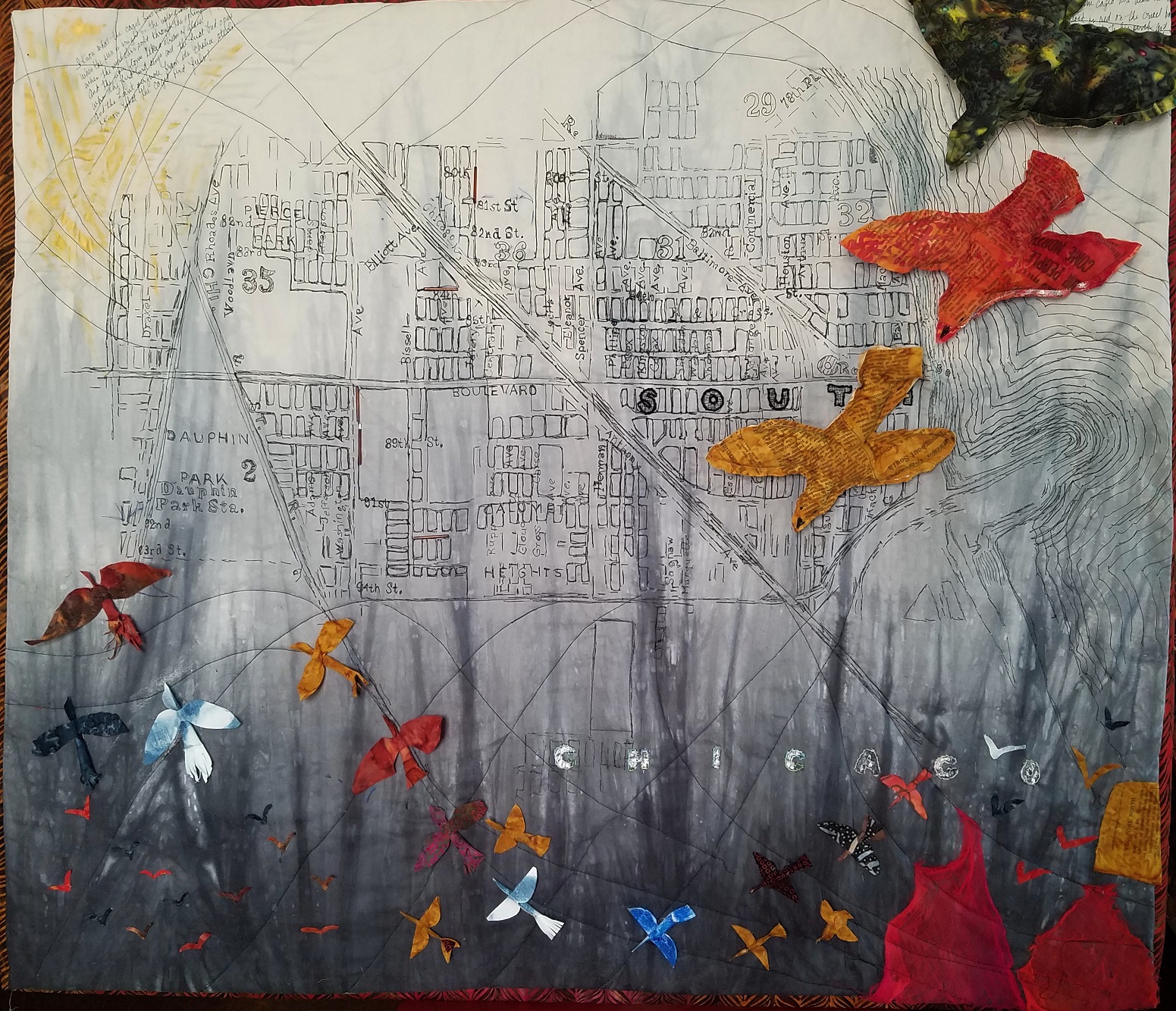 Between 1910 and 1970 an estimated six million people of African descent migrated from the Jim Crow South to urban centers in the North to find a better way of life. This quilt celebrates the flight of those who lit out for Chicago. 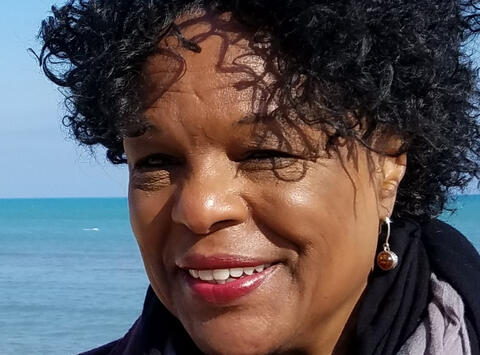 Helen Butler
Bio:   Helen Butler holds an MFA in Theatre Arts from Brandeis University and was nurtured in the cauldron of narrative artmaking and social justice. Inspired by performance artist/activist, Vinnie Burrows, Helen began her career performing story through the lens of African American poetry. She has performed classics from the black diaspora and applied theatre/social justice interventions to various agencies, non-profits, universities, and faith communities. Most recently, she has explored self-reflection and community engagement through fiber crafts and theatre. Her fiber pieces invite a release from the emotional bonds of modern living while the engagement theatre practice seeks to strengthen community ties by exploring narrative through audience participation. She has authored two publications on artmaking practice. https://gositinacorner.com/