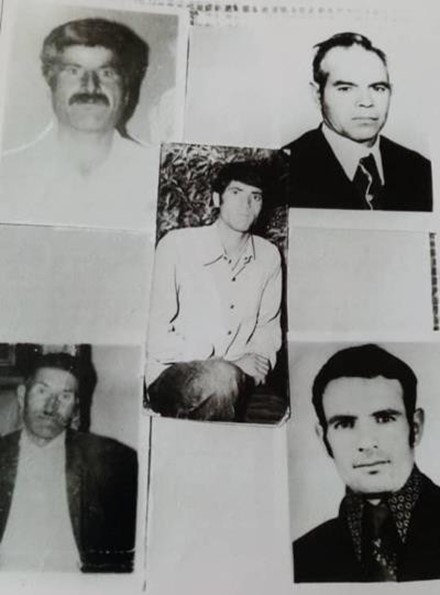 A Shower of Bullets

O SON OF JUSTICE! Whither can a lover go but to the land of his beloved? and what seeker findeth rest away from his heart’s desire? To the true lover reunion is life, and separation is death. His breast is void of patience and his heart hath no peace. A myriad lives he would forsake to hasten to the abode of his beloved. — Bahá’u’lláh, The Hidden Words, Part 2, No. 2

It was late at night in the Jolfa neighborhood in Isfahan when someone rang Saeed’s doorbell. Saeed opened the door and saw a neighbor. The neighbor asked Saeed if he could speak with him in private. Saeed invited him in and the neighbor started talking about the persecution of the Bahá’ís and the dangers they faced in the Islamic Republic of Iran. The neighbor told Saeed his life and that of his family would be much easier if they all converted to Islam. Saeed rejected this suggestion, stating that he knew what was best for his family. About an hour later, Saeed heard the doorbell ring at his uncle’s home downstairs. This was followed by a loud slam of a door. Soon after, Saeed heard rapid footsteps approaching his room. Then his aunt Manijeh entered, crying: “The police are here, and they’re after Goshtaasb!”

Goshtaasb’s son, Babak, was fourteen months old and his daughter, Leeda, was old enough to go to preschool. Goshtaasb adored his newborn Babak and was excited to send his little Leeda off to school. When he heard that knock, all he could think of was finding a way to escape so that he could return to his family later. Saeed quickly turned off all the lights and helped Goshtaasb climb up to the rooftop. But by the time Goshtaasb got to the roof, he found himself surrounded by policemen ready to block his escape route. Goshtaasb tried to run back down the stairs, but one of the police officers stopped him by hitting him in the face with the handle of his shot gun. Heavily bleeding, Goshtaasb was handcuffed and taken to the front yard.

The police went back upstairs to search the house for Bahá’í Writings, but they found none so they headed back to their cars. The sergeant allowed Goshtaasb’s family to say goodbye to him. Saeed came downstairs to say goodbye and saw his uncle sitting in the backseat smiling. He shouted through the window that he would do anything he could to get him released, but Goshtaasb just calmly replied, “Don’t worry.” The car pulled away and as Goshtaasb’s view of his home and his nephew Saeed grew smaller and smaller, his hope of seeing his children again slowly faded. He did not know it then, but he was being taken to Dárán prison in the village of Ferédan, where his father once owned and farmed a large piece of land.

In the prison, Goshtaasb stayed with Saeed’s father, Atta’u’llah, and three other Bahá’í prisoners, all of whom were tortured every day in an effort to get them to recant their religion. Goshtaasb had a delicate constitution and became increasingly frail due to the conditions in the prison. And although his body could not bear the hardship, a spiritual flame was ignited in his heart. He kept his spirits up by praying each night with Atta’u’llah.

Forty-five days passed and all five prisoners were in agony from the torture to which they had been subjected. Atta’u’llah was lashed eighty times and beaten in the face. Then, on the night of September 11th, 1981, Goshtaasb, Atta’u’llah, and the three other prisoners were told they were being released from prison. One of the wardens heard Atta’u’llah chanting a prayer and was astonished by his mellifluous voice, so he asked him to write the prayer down on a piece of note paper so he could remember it. With the prayer in hand, the warden said farewell. Later that night, a group of officers led Goshtaasb and Atta’u’llah, along with the three other prisoners, to the side door of the prison, where they were told to leave immediately.

As they were walking away on the cold sand into the darkness of the night, an officer shouted: “Fire!” There followed a shower of bullets. The execution of these Bahá’ís was believed by some to open the gates of heaven to the Muslims who did it. After shooting the prisoners, the guards picked up their lifeless bodies and put them in a truck and took them to a vacant piece of land nearby. Once there, they asked the locals to dig them a common grave. The locals, however, insisted on digging five separate graves, for the sake of dignity. The bodies of the five prisoners were covered in plastic wrap and blood dripped from them. The guards forbade the locals to mourn, then headed back to their trucks. Once they had buried the prisoners, the locals covered the graves with small stones and later returned to place larger rocks on the graves to serve as tombstones.

Back home, Saeed and his family had decided to pay a visit to their Aunt Habibe. As they drove down the road, they saw a truck heading in the opposite direction. Little did they know that the truck was driven by the vicious souls who had brutally murdered their loved ones.

After hearing Atta’u’llah’s prayer and receiving his note, the warden of the prison had refused to shoot him. He said he did not want to kill an innocent man. As a result of his disobedience, he was sent to serve at the border with the military police for six months. When he returned, he quit his job as warden, and after three years of searching, he found Saeed’s Aunt Habibe. He wept incessantly as he told her the story of all that happened. Then he showed her the note and said he wanted to keep the prayer as a memento. He left and was never seen again.

The story of the martyrdom of two of my uncles, Goshtaasb and Atta’u’llah, has been told in my family for many years. Their immediate families were prevented from holding a funeral and all of their lands were confiscated. Sadly, the persecution of the Bahá’í community in Iran continues today. Goshtaasb never got the chance to see his baby boy, Babak, grow into the man he is now, nor did he ever see his daughter Leeda graduate and go on to have a family. My uncles sacrificed their lives to raise the call of the Manifestation for this day, and although their physical bodies are no longer on this earth, their memories remain alive in the hearts of their loved ones and continue to set an example for future generations. May the world find peace one day, and may all people learn to accept one another and embrace their differences.

Here is the prayer in Persian that Atta’u’llah chanted in the prison, alongside its English translation.